And other weird things humans do… 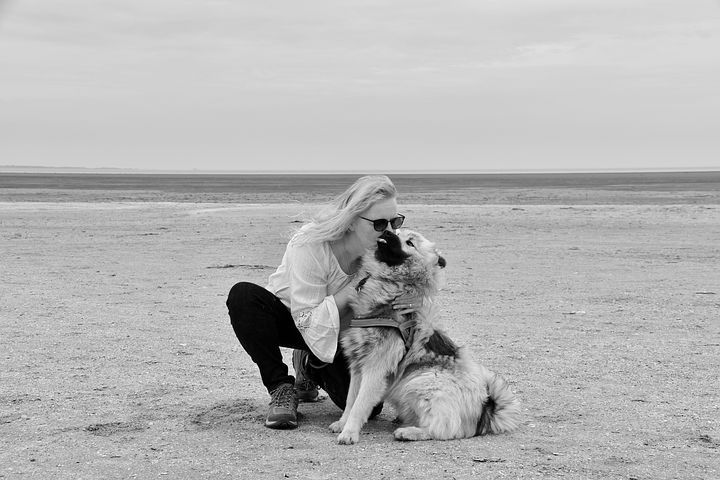 “We should not assume that whatever we think we might be communicating to our dog is understood by the dog the same way.”

You might think that hugging your dog, giving them a pat or a kiss on the head, or even gazing lovingly into their eyes might communicate to your dog how much you love them.

All of these are very unnatural behaviours and situations for a dog to be in, and they are more likely to make a dog feel uncomfortable than loved. We communicate with our dogs in the ways we know how, but we must remember that dogs are not humans and humans are not dogs, so we should not assume that whatever we think we might be communicating to our dog is understood by the dog the same way.

As the title suggests, hugs and kisses are two of the ways we humans attempt to communicate our love and affection for our dogs to our dogs, but let’s not forget that communication means nothing if the message is not understood. In order to try and understand how a dog may understand the situations and circumstances they find themselves in, we must consider what is natural and instinctual for dogs.

“Being pinned down is probably how many dogs experience hugs, and may trigger a sense of stress in your dog.” 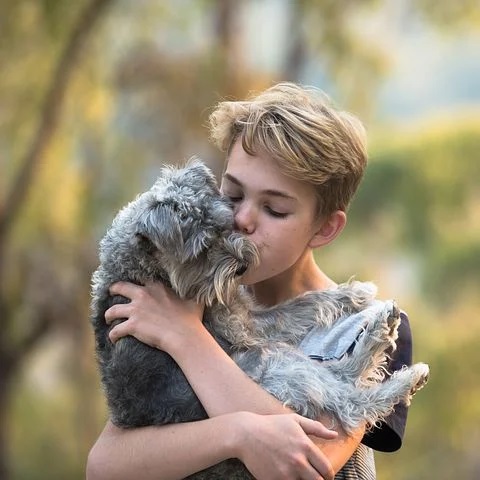 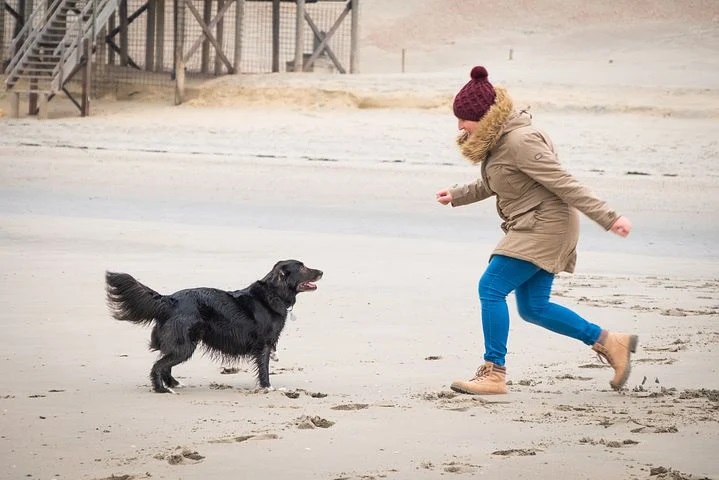 So what are natural and instinctive ways for dogs to communicate affection?

Certainly not by pinning each other down – such a move would be more likely to communicate unfriendly intentions instead of friendly ones. Being pinned down or held in one place is probably how many dogs experience hugs, and it may in fact be more likely to trigger a sense of stress in your dog than the intended feeling of being loved. Some dogs, who may have grown up in a huggy-household may tolerate hugs very well, but again it is not a natural feeling for them, so why put them through it?

One of the most common, natural, and instinctual affectionate behaviours that dogs display is licking and grooming. Grooming is usually reserved for long-time, well-bonded doggy pals, but a dog licking the muzzle of another dog is quite a common method of communication among dogs. This could perhaps be compared to the human kiss, but as could be expected doesn’t necessarily mean exactly the same thing. Sniffing or licking the muzzle of another dog is usually a calming signal, an attempt to communicate “I’m friendly” or “I’m happy to see you”. Although the intended message of kissing and licking are somewhat similar, many of us would probably hold our dogs by the head or the body when planting a kiss, which, just as with hugs, won’t feel particularly relaxing or friendly for many dogs.

Assuming that you’re not about to start going around licking dogs’ mouths in an attempt to tell them just how much you love them, you might want to try just a “muzzle nuzzle” for this communication instead; don’t hold your dog when you do this, but if your dog comes up to for some attention you could try instead putting the side of your face close to the side of your dog’s face – a little sniff and nuzzle this way will feel much more natural and meaningful for your dog than holding them for hugs or kisses. 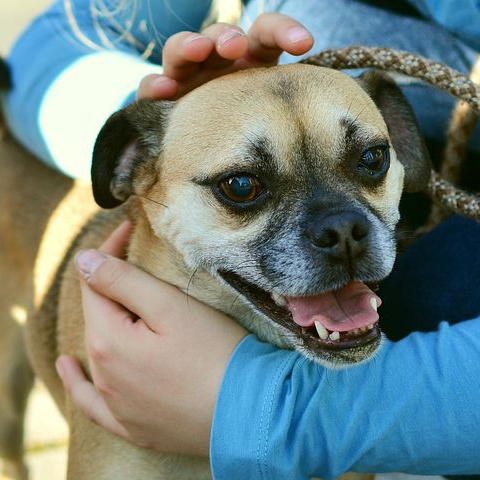 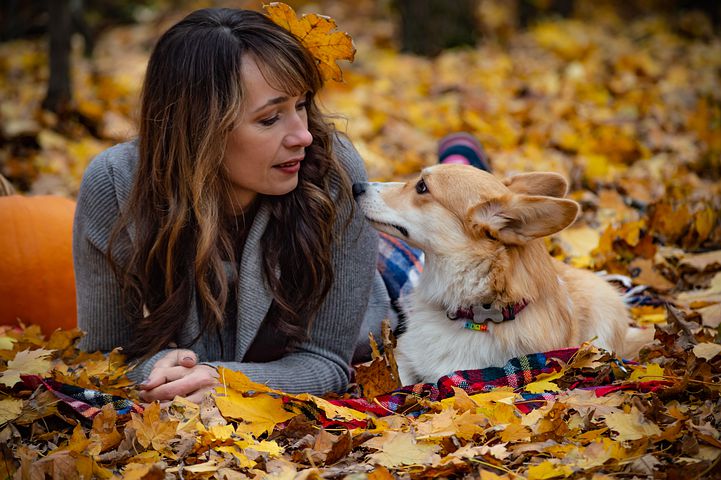 “Affection, in any form, at a time when it is not welcome will not be so well received.”

Some lesser known and probably more surprising human behaviours towards dogs that dogs may actually not be very comfortable with:

Patting a dog on the head

Patting a dog on the head seems like the most natural way for us to interact with dogs, but again, such as with hugging and kissing, it’s natural for us, not for the dogs. In fact, being approached from above is rather threatening to dogs, and we may not always realise how a simple pat on the head may appear from a dog’s perspective. Let’s remember that most dogs are smaller, sometimes much smaller, than humans, and as such a human leaning over their body and a hand approaching the top of their head from above could be very intimidating indeed.

Instead of leaning over a dog and patting them on the head, crouch down, allow the dog to approach you instead of the other way around, and if the dog does approach in a friendly manner stroke the dog on the side of the body closest to you, on the chest, shoulder, neck or side of the face.

Staring a dog directly in the eyes

First, let’s be clear on the difference between eye contact and staring. Brief eye contact between dogs and between dogs and their owners is natural, and can be useful for dog training, such as in teaching your dog to “check in” with you for instructions. Staring is different to mere eye contact – staring is a more prolonged period of intently and intensely looking at someone or something.

I don’t believe humans care much for being stared at, and as it so happens neither do dogs. Staring is a rather threatening and intimidating behaviour for dogs and being stared at will make dogs feel uncomfortable. If you wish to share eye contact with your dog, then brief glances are best or even looking at them from a sideways glance, rather than head on, will feel more comfortable for the dog.

Approaching a dog in a straight line

‘Curving’, i.e. approaching something in a curved, not a direct, line, is a key element of dog-to-dog body language and interaction, and we humans would do well to apply this method to our interactions with dogs as well.

Approaching a dog head-on in a straight line is perceived as impolite and sometimes even threatening by dogs, especially if they are not already familiar with the person or dog approaching them. Approaching a dog in a curved line, ideally while displaying other calming signals, will put a dog more at ease and communicate that you approach in peace. 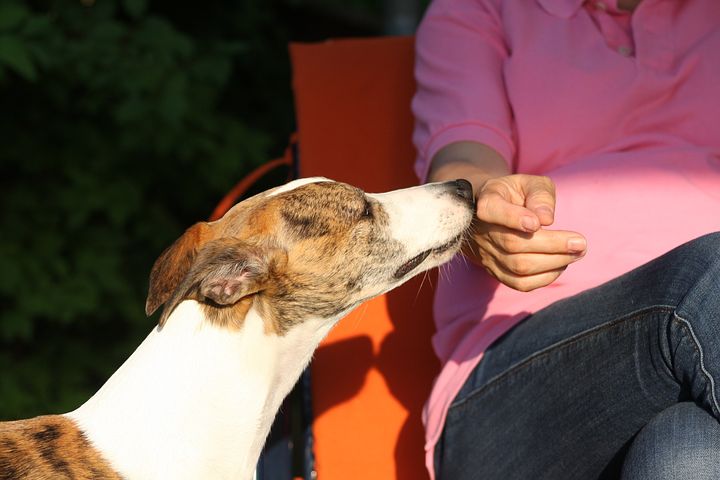